Basketball Coaches!  Did you know that there’s something you’re doing in your practices that may be  causing  some of your athletes to get 10,000+ reps on ONE Leg and NONE on the other.

Almost all coaches make their athletes run line drills for some reason at some point in the season. 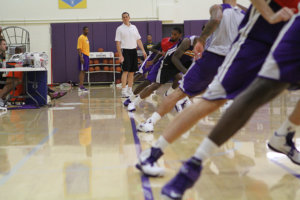 Here’s something you can do to understand the impact of these drills, and the simple change you can put in place:

Have your team run a series of there and backs – let’s say 7 floors total. As they are doing it, do NOT give them any instruction but observe the athletes and count how many pivots/plants/direction changes they each make on each foot. You will be shocked to see that they almost all seem to favor one foot and pivot on it every single time!

So now let’s think about this – in that one 30 second drill your athletes pivoted on one foot 6 times, and zero on the other. Now imagine doing this drill 3 times per practice, 2 times per week, 30 weeks of the year, for 10 years. That would be 10,800 reps on ONE LEG and NONE on the other! Clearly they are building a huge imbalance/gap between the two legs every time they do this drill. Not to mention in a game situation, sure sometimes the live reactive nature of the game will make them pick the other leg, but whenever they have time they will likely pick to pivot on this dominant leg so the imbalance becomes even greater!

Now imagine if you as a coach took this one simple strategy in every line running drill – instruct your athletes to always pivot on the right foot on one side of the floor and the left foot on the other side of the floor. Now all of a sudden after 10 years of reps they have accumulated 5,000 reps on EACH leg (assuming you do your line drills with an ODD number of floors to ensure an EVEN number of pivots :-)). They develop a more balanced body, are less susceptible to injury and their reactivity and performance improves in games because they are less likely to favor one leg over the other!

A simple thing you can do to totally change an athlete’s potential!